Abstract - The fact that ZUGFeRD is a standardized data format for the exchange of electronic invoices is now generally known. After the publication of version 2.0 by the "Forum elektronische Rechnung Deutschland" (FeRD) in March 2019 (updated on October 15, 2019 with version 2.0.1), the next version is now already available since the end of March 2020: ZUGFeRD 2.1. 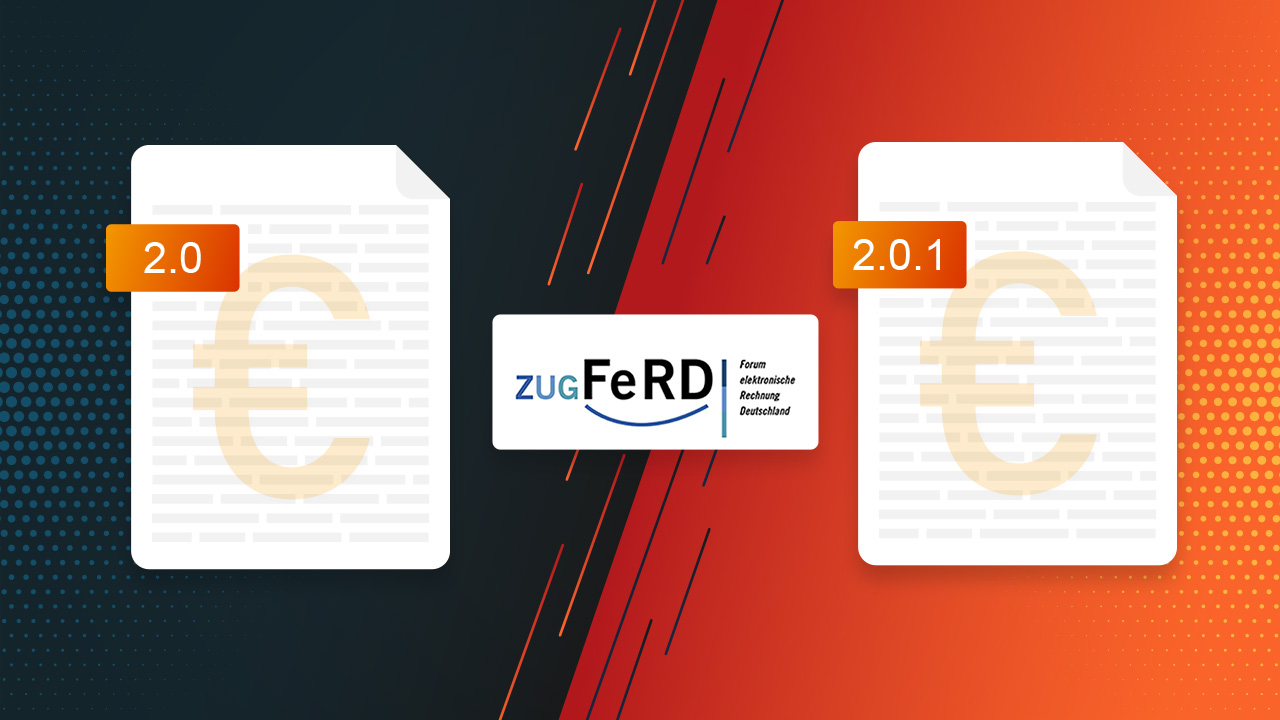 Developments naturally go hand in hand with additional functions and improvements. In case of ZUGFeRD, since version 2.0, these mainly concern the exchange of invoices with public authorities, which is thus simplified. Since April 18, 2020, public sector customers, whether at federal, state or local level, must be able to receive and process electronic invoices in XML format in accordance with EU Directive 2014/55/EU. From November 2020, contracting authorities at federal level will also (almost) only accept electronic invoices.

XRechnung - the German version of the ZUGFeRD 2.0 standard

In this context version 2.0 was so important: unlike its predecessor, it incorporates the requirements of the EU directive and the EN 16931 standard for electronic invoicing. ZUGFeRD 2.0 can therefore be used for sending invoices to public administrations. It is a hybrid format that combines the XML schemas from the existing Cross Industry Invoice (CII) standard from UN/CEFACT with the ISO standard PDF/A-3. As a result, the invoice can be displayed visually on the one hand, but also contains a data section in which structured data is embedded in a strictly defined XML format. In case of ZUGFeRD 1.0, PDF/A-3 was still the sole carrier format, but in the new version it is now XRechnung (at European level "Factur-X"). This is a structured, standardized data record in XML format that can be sent electronically and processed automatically.

The invoice recipient can therefore choose whether to process the human-readable image of the invoice (the PDF/A-3 file) or its "twin", the machine-readable XML data record. This will contribute significantly to the further spread of ZUGFeRD. ZUGFeRD 2.0 thus optimizes the electronic invoice exchange between (also small and technically not so experienced) companies, but at the same time can be used to send electronic invoices to public administrations in compliance with the law, which is the real added value.

Versions are not compatible

In version 2.0.1, code lists have been updated, case-sensitive errors in the specification identifier have been eliminated, corrections have been made to individual cardinalities, and elements have been assigned to individual profiles. Overall, the FeRD release has further aligned ZUGFeRD 2.0 and Factur-X. Important: Version 1.0 and 2.01 are different formats that are not compatible with each other, either upwards or downwards. Although they are very similar in terms of content and technology, Release 1.0 does not meet the requirements for European core invoicing according to EN 16931.

Since Release 2.1 in March of this year, ZUGFeRD 2.1 and Factur-X 1.0 are now fully compatible and technically identical formats that share the Factur-X identifier. Both formats are suitable for invoice exchange between companies, public administration and consumers. Of course, a ZUGFeRD 2.1 invoice still includes a PDF/A-3 file for visual processing by humans. The release package can be downloaded free of charge from FeRD. Although ZUGFeRD 2.0 (or 2.1) is mainly used in German-speaking countries, it can also be used by internationally active companies outside German-speaking countries - also due to the intensive German-French cooperation in its creation.